Microsoft Ignite is coming up soon! One of the sessions I’ll be facilitating is a 75-minute unconference session on using Innovation Games to gather requirements.

Unconference sessions are unique. Designed to be highly interactive, these sessions give you an opportunity to engage with speakers and fellow attendees, learn new skills, and share your ideas. During this Innovation Games session, you’ll learn how games can be leveraged to gather project and feature requirements, determine what motivates our team members and customers, and build shared understanding. You’ll participate in several Innovation Games during the session, and learn how you can adapt and facilitate the games once you return home.

Introduction
Late last year, I partnered with Mariah Gauthier and Matthew Ruderman to design a series of Buy a Feature innovation games. The games were used to gather feedback on the design of an Office 365 education site. During the game, we presented users with a list of education site features, along with corresponding prices for each. Participants were asked to “buy” the features they wanted using play money.

The hardest part of designing the game was pricing individual features and determining the amount of play money each participant would receive. How do we decide which features are the most expensive? And what formula should we use to calculate the amount of play money to provide each participant? If we gave our participants too much money, they wouldn’t have to prioritize their feature needs. If we gave them too little money, we’d lose valuable insights since only a few features would be purchased.

This guest blog post outlines the process we took to determine feature pricing. We hope this helps you as you plan your own innovation games. Enjoy!
– Sarah Haase

Post from Mariah Gauthier:
Supporting internal end-users of Office 365 at your organization can be challenging. We live in a tech-centric world, which means that consumers want access to on-demand support options hosted via a modern platform…even in the workplace. With Office 365, the tools for building a solution to fit this expectation are accessible, but you’re still going to need a game-plan going into it. There are many options for what you are able to include in an Office 365 education site, including (but certainly not limited to): descriptions of products, news announcements, Q&A, training options, and Tips & Tricks relevant to your specific environment. This being said: it takes a significant amount of time and available resources to build-out this solution from scratch, making it difficult to know where to start.

Innovation games, and the specific use-case of Buy a Feature, give you the ability to prioritize your list of possible “features” by engaging the opinions of the audience that you are designing for: your consumers! Buy a Feature allows players to prioritize a list of options that are available to be included in the design of a given solution. Players are given a budget and a list of possible features, with the goal being to fund the features that they most want to see included in the final product. For more information on how Innovation games can support your SharePoint/Office 365 strategy, check out a recording of Sarah’s Minnesota SharePoint User Group session.

Buy a Feature is a great way to engage your end-users in a way that both is innovative and inclusive. However, before the games can begin, you first need to walk through the steps of compiling the list of possible features to be offered in your proposed solution. For example: after doing some brainstorming, you come up with a list of 10 offerings (i.e., “features”) that you could potentially include in the design of your Office 365 education site. At this point, you can begin to determine the individual budget of each player and the total value of all of the offered features combined. I used Luke Hohmann’s book, Innovation Games: Creating Breakthrough Products Through Collaborative Play as a guide to determine these thresholds. The key is to determine what proportion of the Total Feature Value that you want players to have access to. I went with an approximate 50% ratio, meaning that the combined budget of all players in each round of the game would amount to about half of the total value across all of the offered features.

After establishing your figures, you can then move in to assigning each feature with a price to be used during the game. To do this, review your list of possible education site offerings and consider which options will be the easiest and least time-consuming to build, and which will take more effort to create. Choose a scale of weight to use in this exercise (for instance, a scale of 1-7) and allocate accordingly. Once you’ve weighted each feature, you are then able to calculate your list of prices. I found that the best way to do this was to create a quick Excel workbook. I’ve included a template for you to use in your own applications of Buy a Feature. One important tip going into the pricing phase of your exercise: make sure that features with a weight of “1” are priced low enough so that an individual player can buy it independent from the rest of the group. Part of the value of this activity is in observing how players choose to purchase features, whether it be on their own with only their personal budget as a resource, or by choosing to collaborate with other players to buy features at a higher price-point. 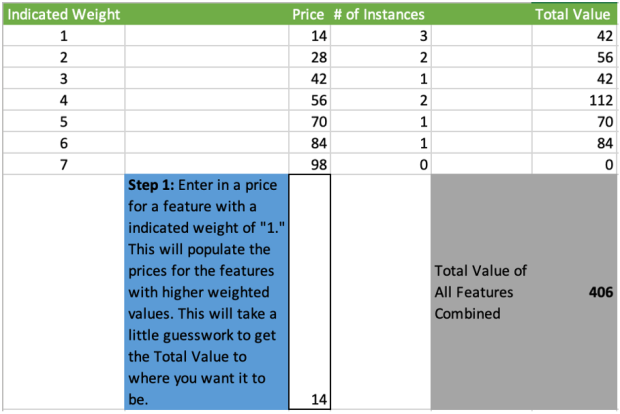 The next step in this process focuses on deciding the number of innovation game sessions that you want to hold, and the rate at which you want to schedule them (example: 2x per week). There is no hard-and-fast rule for how many Buy a Feature sessions that you will need to hold to get a solid set of findings, although I would suggest hosting at least five (this will vary widely depending on your use-case). The overarching goal is to continue running sessions until you are no longer collecting any new data. Once the data that you are collecting becomes redundant (i.e., the results that you are getting are consistent from game-to-game), you can stop holding sessions and start analyzing your findings!

Some tips that I can offer you in prepping for and running your sessions:

After hosting your sessions, you will be able to review your data and use it to form a well-researched and market-based set of next-steps. The beauty of Buy a Feature is that through engaging your end-users on what they want to see included in a solution, you can avoid falling into the trap of assuming you know what your users need!

What are Innovation Games?
Innovation Games are a set of simple games you can play with your customers, your peers, and your project teams to build shared understanding. There are a wide variety of Innovation Games, and each is designed to elicit a different outcome or data set. Games can uncover unmet market needs, drive product design, build/repair work relationships, or define strategic priorities. The games serve as a framework of principles and best practices you can leverage to gather qualitative or quantitative information. The data gathered through Innovation Games can be used to shape strategies, gain momentum, and build bridges with core constituent groups. Bottom line: Innovation Games are a fun way to engage your customers, your employees and your teams. 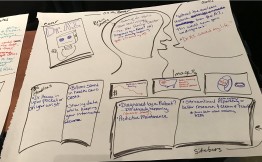 The full abstract for the August MNSPUG session is provided below.

Using Innovation Games to engage your SharePoint/Office 365 users
As SharePoint/Office 365 practitioners, one of our most important jobs is driving user engagement. We need to educate and inspire our users to learn about and leverage these technologies to drive Digital Workplace improvements. But how do we drive engagement, interest, and enthusiasm?

This session introduces Innovation Games, an inventive method of engaging your end-users. You’ll learn how gaming strategies can help you gather requirements, build consensus, drive strategic direction, determine business/technology priorities, and recover broken workstreams and projects. Don’t miss your chance to experience Innovation Games firsthand! You’ll leave with fresh ideas on how to liven up your meetings and drive interest and engagement in SharePoint/Office 365.

On March 19th, I’ll be delivering a user adoption presentation for the Minnesota Office 365 User Group. The session will provide practical guidance on:

Details for the session are provided below. Hope to see you there!

The full session abstract is provided below.

Driving adoption of Office 365: From idea to implementation
For many of us, the challenge of driving sustained adoption of Office 365 feels insurmountable. We start off with the best of intentions, but most of our users get lost in the myriad assortment of technologies and fail to leverage the capabilities to drive business value. How do we inspire our users to want to learn about Office 365 and educate them so they can leverage its rich capabilities to drive business optimization?

This in-depth session explains the foundational concepts of user adoption. You’ll learn why it’s so challenging to drive lasting adoption and how user-centric adoption models can increase your success. You’ll receive practical tips on how to engage and understand your business users, learn how to build internal communities of practice, discover how to overcome user resistance, and see examples of real-world adoption programs that have driven lasting change at other organizations.

Let’s start with the obvious question–what are Innovation Games?

Innovation Games are a set of simple games you can play with your customers, your peers and your project teams to build shared understanding. There are a wide variety of Innovation Games; each game is designed to elicit a different outcome or data set. Some games can help you uncover unmet market needs. Other games are geared to driving product design, building/repairing relationships or creating strategic plans. The games themselves are just tools; a set of gaming principles and best practices you can leverage to gather qualitative information. The data gathered through Innovation Games can be used to shape strategies, gain momentum and build bridges with core constituent groups. Bottom line: Innovation Games are a fun way to engage your customers, your employees and your teams.

In September 2015, I led an introductory workshop on Innovation Games for MNSPUG (the Minnesota SharePoint User Group). The session introduced the concept of Innovation Games and highlighted how Innovation Games can help teams gather requirements, build consensus, drive strategic direction and recover broken work streams and projects. MNSPUG attendees were able to see Innovation Games at work firsthand. Don Donais, Liz Sundet, Matt Ruderman and I facilitated a live version of the Low-Tech Social Network and four separate iterations of the Speedboat game during the 3-hour workshop. Check out the pics of our completed games below.

If you’re interested in learning more, check out the MNSPUG session recording below. (A big thanks to the folks at Avtex for providing the recording.) To help you navigate the lengthy session, track times are outlined below.